For April 20, 2015, here's how the stock market did today, earnings reports, the top stock market news, and stocks to watch based on today's market moves... 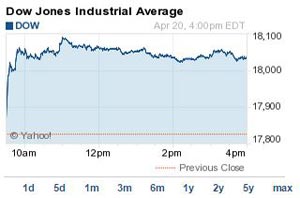 The DJIA Index rose 208 points Monday. The rally was fueled by better than expected earnings reports and news that China slashed commercial bank reserve requirements by 1%.

In its second industry-wide cut in two months to this metric, the nation has freed up roughly $200 billion for lending in an effort to stave off slowing economic growth.