For April 21, 2015, here's how the stock market did today, earnings reports, the top stock market news, and stocks to watch based on today's market moves... 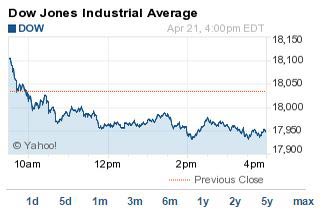 The DJIA today slid 85 points as corporate earnings continue to show the effects of a strong U.S. dollar. The dollar has surged more than 9% year to date and punished companies with a broad international focus and reliance on overseas sales.

The Nasdaq moved 19 points higher on news of a proposed biotech merger.