Low gold prices are likely the impetus for increased M&A activity. As explorers, developers, and producers all attempt to trim spending and rationalize costs, more are turning to the strategy of business combinations.

It's a trend that's likely to heat up in the short and medium term as pressure builds to minimize losses and squeeze out profits.

This all means profits ahead for certain gold mining stocks - here's where to look...

"Merger of Equals" Between Alamos and AuRico 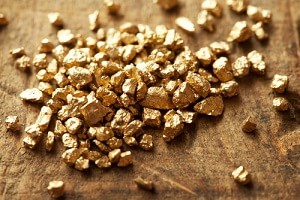 In a deal valued at $1.5 billion, the new business will bear the name of Alamos Gold. With similar market caps, the two entities are combining in what many see as a merger of equals.

The market appears to have liked the deal. On April 13, the day of the announcement, Alamos shares gained 6.6%, while AuRico shares rose 8.2%.

Cash-rich Alamos has been seeking to add to its production assets, while cash-poor AuRico will benefit from the funds to help develop its Young-Davidson mine in Ontario. By some estimates, combined production should reach 400,000 ounces in 2015 and as much as 700,000 ounces by 2018.

As a result, the new Alamos will become a noteworthy contender in the mid-tier gold-producing space.

There will also be a spin-off company named AuRico Metals. It will contain AuRico's Kemess project, a 1.5% net smelter royalty on Young-Davidson, AuRico's Stawell and Fosterville royalties, plus about $20 million in cash. The new Alamos will hold 4.9% of the new company. The balance of shares will be split evenly among Alamos and AuRico shareholders.

The best part for investors: the gains might not be over...