Microsoft Corp.'s (Nasdaq: MSFT) Q3 earnings don't figure to offer many surprises, but even a small beat will drive up the MSFT stock price.

The Microsoft stock price is down about 14% from its 52-week high of $50.05, which it hit Nov. 14. Most of the decline came following Microsoft's last earnings report in January, when disappointment over sales in the commercial division dropped MSFT stock 9.3% in one day.

Since then the MSFT stock price has not fully recovered, trading between $40 and $44. Microsoft stock closed Wednesday at $42.99. 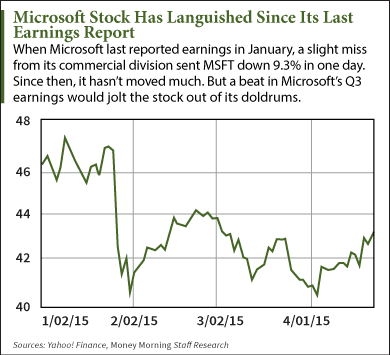 That's set Microsoft stock up for a technical move of "filling the gap" on any positive news from the Q3 earnings. (Microsoft's fiscal year ends in June.)

If the Redmond, Wash.-based tech giant can show that its transition strategies toward the cloud and mobile are working, it won't need a dramatic earnings beat to move the MSFT stock price.

Microsoft, like longtime partner Intel Corp. (Nasdaq: INTC) and most PC makers, has suffered as PC sales have leveled off in recent years. Investors mainly want to know that Microsoft has a viable plan for future growth.

Here are the details on Microsoft's Q3 earnings…

What to Watch for in Q3 Microsoft Earnings

The numbers: Analysts are looking for earnings per share (EPS) of $0.51, which would be a 25% drop year over year. Only a huge beat will be enough to avoid the fifth straight quarter of year-over-year declines. The forecast for revenue is $21.1 billion, which would be a 3.4% increase over the revenue of $20.4 billion in Q3 of 2014. It would also be the fourth straight quarter of year-over-year revenue increases.

The last quarter: For Q2, Microsoft was in line with estimates on EPS, reporting earnings of $0.71 a share. That was, however, a 9% decline from the same quarter a year earlier. Revenue was $26.5 billion, just above expectations for $26.32 billion.