But the most intriguing meeting was with someone whose name most wouldn't recognize.

And the implications of that pow-wow could be the biggest clue of what's to come (including a "Grexit" or exit from the European monetary union), and how to prepare...

The Name That Mattered in Greece's Recent Pleas

Possibly the most significant Varoufakis tête-à-tête in mid-April was with sovereign debt lawyer Lee Buchheit.

Here's how the Financial Times describes him:

"Mr. Buchheit, a senior partner at law firm Cleary Gottlieb, is the man virtually every country in financial distress calls when a restructuring beckons. Over the past three decades his clients have included Russia, Mexico, the Philippines, Iraq, Iceland, and more recently Greece, where he orchestrated the biggest restructuring in history."

Considering how dire Greece's straits are looking these days, odds are climbing that Mr. Buchheit will count the desperate nation as a repeat client... only a few short years later.

As a clear signal of desperation, just days ago the Greek government issued a decree obliging local governments to send their cash to the nation's central bank. Some familiar with the situation expect that will raise about 2 billion euros to help meet civil servant salaries (potentially, read: IMF obligations) at month's end.

But desperate times are calling for desperate measures. With a tranche of near 1 billion euros due in early May to the IMF, the Greek treasury is scrambling. Bailout agreements mean Greece owes 22.5 billion euros to creditors this year alone. The graphic below shows what their major tranches of payments look like. 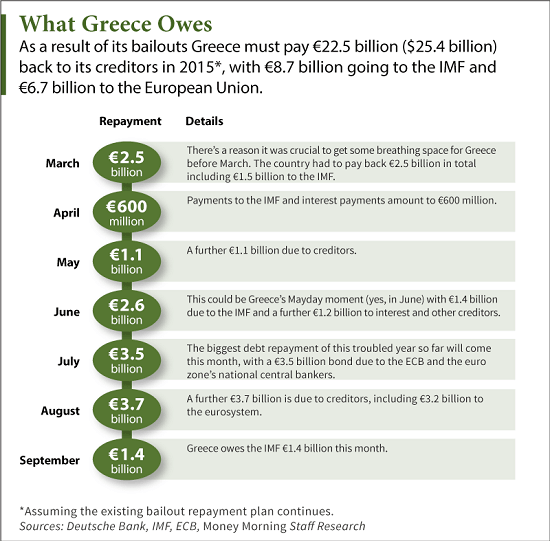 And yet just 8% of the bailout money owed by Greece ever finds its way to Athens. The other 92% instead serves to bail out mostly German, French, and American banks holding Greek debt "hot potatoes."

The reaction of Greek citizens has, of course, been quite predictable. Those with enough savings to care have been buying one-way tickets for their mobile assets as withdrawals continue unabated. It's a topic I covered here back in February.

A senior Greek official recently told The Telegraph that "We are a Left-wing government. If we have to choose between a default to the IMF or a default to our own people, it is a no-brainer. We may have to go into a silent arrears process with the IMF. This will cause a furor in the markets and means that the clock will start to tick much faster."

Another source admitted, "We will shut down the banks and nationalize them, and then issue IOUs if we have to, and we all know what this means. What we will not do is become a protectorate of the EU."

UniCredit Bank AG's Erik Nielsen thinks it may only be a question of time before Athens' cash runs dry and has to resort to printing new drachmas.

Meanwhile, Athens estimates it will need 19 billion euros in the next 12 months alone, surely an overwhelming challenge for a nation now running a serious risk of being totally shut out of debt markets.

That has the ruling Syriza party grasping at arguments to help counter its obligations.

They're totaling up possible WWII reparation claims against Germany, investigating the circumstances surrounding Greece's mega bailouts and, believe it or not, gauging whether some debts should be considered "illegal" or "illegitimate" since they were taken on without citizens' consent and are not employed for their benefit.

It's getting harder by the day to see Greece and its lenders kick the proverbial can still farther down the road.

And we can't ignore the risk of contagion should Greece default, leave the euro, and resort to printing its own new currency.

But there are things you can do to create your own financial firewall.

Good article and thanks for the payment list.
Much as I am sitting on a pile of cash hoping for a Grexit so that I can buy Greek equities on the cheap, I still think there will be an eleventh hour compromise regardless of the news in MSM at the moment.
MSM is just trying to get the message across that the ECB are not bluffing while Greece and many others like me do think they are.
And in doing so, MSM's reporting is increasing the interest rates for short-term borrowing so really I see this as just the banks rigging the market. As per the norm nowadays.

Peter Krauth and gentlemen, thank you for the contribution that is given to me over the money in the morning.