In fact, there are three changes happening in the industry right now, all of which point to a huge price recovery throughout the year.

Here's what our natural gas price forecast shows for the commodity in 2015...

Natural Gas Price Forecast 2015: Why There's a Rebound Ahead 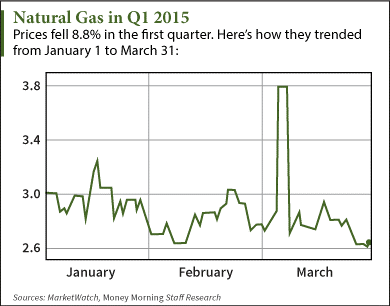 Natural gas prices had a bad first quarter. Futures plummeted 8.8% during the first three months of the year.

The same went for the rest of the energy industry. WTI oil prices saw a 15% decline while Brent fell about 6%. The S&P 500 energy sector saw an overall decline of 3.6%.

The first is the switch from coal usage to natural gas usage. Federal environmental regulations are forcing companies to use natural gas because it releases fewer carbon emissions than coal. About one-third of coal-generating capacity in the U.S. from 2012 will be retired by 2020.

"This transition has been going on for some time now," Moors explained. "And while there is a balance forming in several specific regions in the country where coal (even lower grade coal) has reached usage equilibrium with gas, the larger move to gas continues to gain momentum."

The second is the increased use of natural gas in producing petrochemicals. Oil was used in the past - but now ethane (a type of natural gas) demand is expected to grow by more than 600,000 barrels per day by 2018, to 1.6 million bpd.

The final shift is U.S. exports of liquefied natural gas (LNG). The U.S. will begin shipping LNG around the world by the end of the year in order to meet rising energy demand - which will double over the next 10 years. The Department of Energy has approved five export projects since 2012. Cheniere Energy Inc. (NYSEMKT: LNG) is first in line and set to start exporting this year.

With natural gas demand ready to explode, here are a couple ways to get in on the profits...

Alex,
In your article on Natural gas prices you state that the US will be expanding exportation of natural gas, "… to meet rising energy demand – which will double over the next 10 years." I think those projections are accurate. There is only huge flaw in those projections. Virtually all of the worlds scientists are in complete agreement that if the world hasn't drastically REDUCED its consumption of all forms of fossil fuel ten years from now, your chances and the chances of anyone under the age of 50 to live a life even remotely close to the one you live now are near zero.
While I appreciate the analysis all of you at Money Morning make about the short term dynamics of markets, economics and the international financial world, I am completely stunned by all of your long term projections. Among all of you there seems to be a complete lack of understanding of the nature, magnitude and urgency of the global climate change crisis that is upon us. This crisis is going to impact all of us in complex and very destructive ways and every day that each of us ignores this fact increases that impact. Here is just one fact about climate change: Doesn't it stand to reason that the injection of 100,000,000 tons of Carbon dioxide into the atmosphere every day would have an effect on the climate? Think about it…..then DO something.
Bob Braaton

Global warming / climate change – sure it exists, but the true fact is that it is happening with or without human input. Did you know the largest contributor to carbon emissions is actually trees. That's right; live, green, shade producing, fruit bearing trees.

So let's all agree that humans may be contributing some to the whole warming process. You say "DO SOMETHING"… well perhaps you should re-read the article.
Natural gas is more efficient and less carbon polluting than alternative energy sources that are being slowly replaced. Sure solar and wind power may be growing but not fast enough to just stop the current carbon energy sources society depends on for existence. And don't forget, these new technologies are energy consumers as well. Infrastructure must be built, technology perfected, and product development rolled out into the mass market.

Doom and gloom has it's place, but if you believe the world is coming to an end because people are not implementing change fast enough, then you are clearly watching too much TV. Do yourself a favor and go take a walk in nature. It's beautiful there. More than a century of this country being in an industrial revolution and we still have vast areas of it still green and fresh. It will give you a better perspective that the world is not falling apart despite what your favorite newscaster tells you.

When you return from you little hike, jump into your SUV and head down to the next green peace protest. While driving there, take the scenic route, the little extra gas you burn really won't do as much damage as you think and the relaxing views will be good for your mind.

Hi all,
We must be very careful about the so called "Global Warming" (and the associated possible alarmism). Scientists (whose opinions are not listened in the social media) advise to pay attention to "Global coolling", instead…There are other facts that point to this possibly more deadly issue. In this case, fossil issues and natural gas would become much in need…

Thans for the information.

Given that 3-5% of world natural gas is used in the Haber-Bosch process to produce ammonium based inorganic fertilizers what do you think the impact this will have on the cost of these fertilizers and agricultural production?