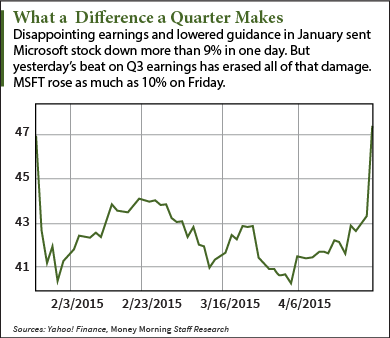 Even with a decline in Windows sales, one of the company's traditional cash cows, Microsoft handily beat Wall Street expectations. Earnings per share (EPS) was $0.61, compared to the consensus forecast of $0.51. And revenue was $21.7 billion, which exceeded the $21.07 billion analysts had expected.

Despite the beat, EPS fell 5% from the same quarter a year ago, although revenue was up 6%.

"The company beat across the board," FBR Capital markets analyst Daniel Ives told Reuters. "The Street will cheer these results as it appears Microsoft is back on the right track after a head-scratching performance last quarter."

MSFT stock opened Friday morning up 5.37% and kept rising through the morning and into the early afternoon as investors realized this was more than just a good quarter. The 10.45% pop was enough to erase the damage on the Microsoft stock price inflicted in January by disappointing earnings and lowered guidance.

In the earnings conference call, Microsoft CEO Satya Nadella emphasized the importance of the transition to mobile and cloud-based businesses.

"This is a new world with new growth. It's a world that requires fundamental transformation in products, business models, and delivery models across Microsoft," Nadella said.

The Q3 Microsoft earnings results (the company's fiscal year ends in June) illustrated both the progress and the challenges facing the Redmond, Wash.-based tech giant.

Revenue from the iconic Windows operating system on PCs sold to businesses was off 19%, while revenue from Windows on PCs sold to consumers fell 26%. That partly reflects the worldwide decline in PC sales, which research firm Gartner said were down 5.2% in the first quarter of 2015.

But it also reflects a tough compare to last year, as the end of support for Windows XP last April spurred a high number of upgrades over several quarters. Still, even with Windows 10 on the horizon with a launch expected in late July, the days of robust Windows sales growth are long over.

That's why Microsoft's transition to cloud and mobile-based businesses is so urgent. It's a tribute to the company – and to Nadella's leadership – that this transition is far enough along to not only blunt the lousy Windows numbers, but deliver a solid beat.

The areas that outperformed in Q3 are Microsoft's future…