And that has many investors asking us the same question: "Should I buy Netflix stock?"

To understand where NFLX stock is going, we have to look at what's fueled its run in 2015... then you will see if Netflix stock is the right investment for you... 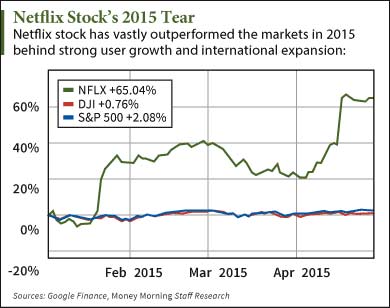 On April 15, Netflix reported earnings per share (EPS) of just $0.38 for Q1. Estimates had called for EPS of $0.69. Revenue was in line with expectations at $1.57 billion for the quarter.

But NFLX stock still soared more than 17% the following day.

Of those additions, 2.6 million were international compared to the company's forecast of 2.25 million. Netflix has been working to grow its international user base and this quarter's performance was a huge success. Netflix is now available in over 50 countries.

The third reason the stock has soared is the company's focus on original programming. The third season of "House of Cards" as well as new shows "Unbreakable Kimmy Schmidt" and "Bloodline" were highly touted by the company in Q1.

While Netflix stock has been unstoppable in 2015, it doesn't mean retail investors should buy in now. In fact, here are two major areas of concern for shareholders in 2015...

I was once subscribed to Netflix and ended it up disappointed. I've been expecting too much. My subscription was a waste of money, you know. It wasn't worth it at all. Spamming us with foolish movies? what the heck. Now, I'm using that thing called VPN. I've been subscribed to my VPN provider IronSocket for several months now and I use them to unblock Netflix and I get to stream their movies online freely.