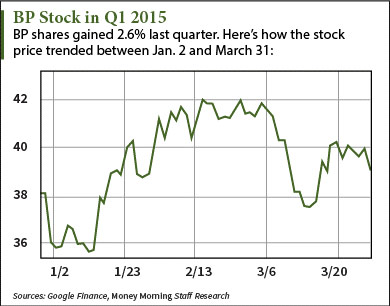 The BP stock price is up about 1% since then, even though BP Q1 earnings report fell short of analyst expectations. The company posted $2.1 billion in profit – about 40% less than the $3.48 billion in profit from Q1 2014.

But there's a silver lining in the bleak report…

BP's downstream operations, including refining and chemicals production, reported a profit of $2.1 billion. That's more than double the company's downstream profit from the first quarter of last year.

How the Downstream Sector Can Move BP's Stock Price

Total SA (NYSE ADR: TOT) reported a loss of $5.7 billion in Q4 2014 – but earnings from its downstream division more than doubled from the year-ago quarter. Royal Dutch Shell Plc.'s (NYSE ADR: RDS.A) refining business more than tripled from $472 million to $1.54 billion over the same period.

"For years refining has been the ugly duckling in big oil companies' portfolios," reported The Wall Street Journal, "but the sharp drop in crude prices has boosted the sector's profitability."

Now, the performance of companies' refineries has improved as they enjoy strong demand and lower oil prices.

Here's where the BP stock price is headed…