Investors holding McDonald's Corp. (NYSE: MCD) stock are finding themselves more disappointed with the one-time market favorite than ever before. Its share price has been flat since 2012. And since its May 13, 2014, high of $103.53, McDonald's stock price has bounced dramatically - down 15% at one point in December to $88.46.

And what's the story for new investors asking, "Should I buy McDonald's stock?"

Should I Buy McDonald's Stock? 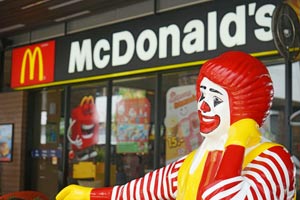 Analysts are making a big bet on MCD stock based on the May 4 pledge by CEO Steve Easterbrook to turn the company around.

These analysts are hopeful the company will pull through with Q2 earnings better than the dismal ones reported for Q1. And their wishful thinking stems solely from Easterbrook's promise.

But the fast-food chain's most recent report revealed MCD's global comparable sales at its restaurants that have been open for at least 13 months fell by 2.3%. Revenue fell to $5.96 billion, which is down 11% from the $6.7 billion reported this time last year.

Fitz-Gerald isn't fooled by Easterbrook's promise. "It's wishful thinking," he wrote today. "No amount of conjecture can put these results, or McDonald's overall position in its sector, in a good light."

Only one analyst outwardly expressed similar sentiments on the matter. R.J. Hottovy, a senior restaurant analyst at Morningstar, said, "The results show it's not going to be an overnight turnaround story." Hottovy's statement could be perceived as a sort of warning to the analysts who have such high hopes for MCD's quick recovery.

There's a lot CEO Easterbrook has to do if he wants to see McDonald's revenue and stock completely recover.

Fitz-Gerald says, "... he'll have to simplify his menu with products that the market actually wants. McRibs, crab sandwiches, and barbecue experiments are just a few of the diversions they've had in the last few years that have alienated their consumers and created an opening for new rivals like Chipotle and Shake Shack to exploit."

Fitz-Gerald also suspects that part of the problem seems to be that McDonald's strayed from their core values and tried, instead, to be fancy and esoteric.

"It's very significant to me that consumers are willing to pay 60%, even 70% more for burgers at Shake Shack or Five Guys, when at the end of the day they're splurging on what is still just a slab of meat between two buns," he writes.

If you're wondering, "Should I buy McDonald's stock just for the dividend?" consider this: while the company has raised its dividends every year since 1977, Fitz-Gerald says there are serious concerns about whether or not those yields will be sustainable for much longer.