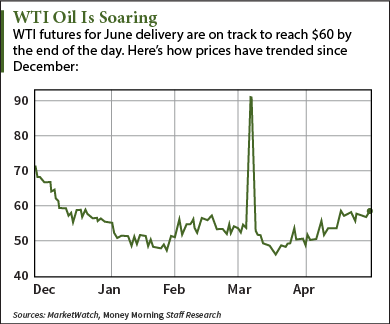 The price of oil per barrel continues to rally toward $60 today (Thursday). The month-long tear inspires bullish hope that oil prices will keep punching through the ceiling to new yearly highs.

"The key issue is whether the latest data represents a directional shift in fundamentals that warrants a more positive view on prices or instead reflects temporary factors that do not negate a persistent and underlying weakness in the U.S. market," BNP Paribas said in a report.

According to Money Morning Global Energy Strategist Dr. Kent Moors, the former is happening. The April rally illustrates the strong rebound the price of oil per barrel will have in Q2 and beyond.

Where the Price of Oil per Barrel Will Go in 2015

Oil reserves will continue to decline as the rig count keeps falling. Baker Hughes Inc. (NYSE: BHI) reported that the count decreased by 31 for the week ending April 24. That brings the total to 703 – the lowest since Oct. 29, 2010.

"Probably the most encouraging sign for oil prices is that supply drawdown," said Joseph Tanious, principal and investment strategist at Bessemer Trust, to The Wall Street Journal. "But I'd want to see more confirmation of that – that it's happening in a sustained way – before we call a bottom."

Unconventional wells only produce for an average of 18 months, meaning most of them will die out by mid-summer. Combine that with increasing M&A activity and supply will have nowhere to go but down.

"I do believe oil prices will climb significantly by late August," Moors noted. "Assuming there are no geopolitical 'wild cards' that cause prices to spike higher, I believe oil will trade in the low $80s range by the end of 2015."

Even though prices are still reasonably low, there are plenty of profitable ways to invest in the oil sector.

Thoughts on the price of oil per barrel today? Talk to me on Twitter at @AlexMcGuire92

When oil prices hit a low of $45 a barrel we paid 77 cents a liter at the pumps in Canada, now it is sitting at $58 a barrel but we are back up to $1.18 a liter??? Sorry the math doesn't add up! All i see is greedy oil corperations and Government gouging, raping and pillaging as per usual. We seem to be headed for a recession and the job market is brutal for the most part but yet that handful of greedy bastards find it feasible to jack pump prices at will.