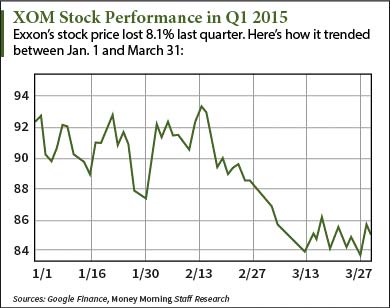 But the sector is poised to rebound this year as WTI and Brent prices move higher. Money Morning Global Energy Strategist Dr. Kent Moors expects oil to trade in the $80 range by the end of 2015.

Despite an earnings drop from the year-ago quarter, Exxon's Q1 numbers smashed expectations.

But both amounts still surpassed analyst projections. According to Bloomberg, Exxon's earnings beat Wall Street's $3.64 billion forecast by 34.6%. The EPS was 42.7% higher than analysts' projected $0.82.

The upstream sector was unsurprisingly weak. It made $2.9 billion, which is a 63.8% decrease from the year-ago quarter's $8 billion. Exploration and production (E&P) operations alone generated $52 million in losses.

On the other hand, Exxon's downstream saw huge gains, which has been a common theme this earnings season. Profits from the firm's global collection of refineries more than doubled to $1.67 billion. Downstream facilities outside the United States reported an almost sixfold profit increase.

XOM stock immediately reacted to the numbers. Shares were up 0.8% by the time markets opened yesterday morning – but they fell 0.5% by market close.

With all these mixed results, the big question is…

Should I Buy XOM Stock?