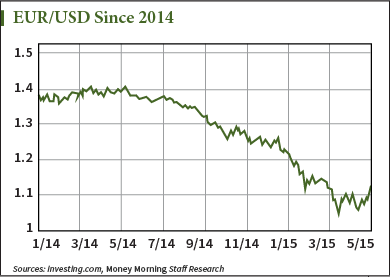 Don’t be fooled by this sudden rebound.

The fundamentals support a fast dive to euro-dollar parity. But the technical traders simply won’t allow it to fall to those levels so quickly.

This isn’t because there was any reason to believe in the strength of the euro. For the most part, hitting $1.0484 was a technical extreme. All it took was a weak earnings season fueled by a stronger dollar to give traders a reason to start buying euros again.

Make no mistake about it. This bump is temporary. The euro is not suddenly going to take off. No fundamental indicator in Europe supports a stronger euro, even if the technical traders are wary of selling down to euro-dollar parity so quickly.

Here’s why euro-dollar parity will still happen, even if it does snap back a little on the way down…

Why Euro-Dollar Parity Is Not Far Off

The Eurozone has two key headwinds working against the euro’s strength that will ultimately fuel this long-term downtrend to euro-dollar parity.

The 60 billion euro ($67.2 billion) a month central bank purchases of Eurozone government sovereign bonds and other assorted assets is aimed at kicking the slow-growing European economy into shape.

But it’s much less about helping the broader currency bloc than it is a giveaway to the banks.