A rapid-fire string of good news over the past week has help nudge up the price of Bitcoin.

A week ago the Bitcoin price was hovering around $225, which is somewhat disappointing since just six weeks earlier it was threatening to break through the $300 level. 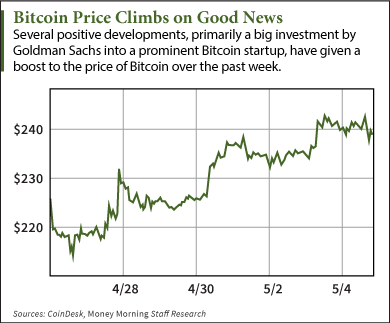 But then we started to get some major positive Bitcoin news. Over the past few days, the Bitcoin price is up about 7%, trading in the neighborhood of $240.

The price of Bitcoin hit a 15-month low of $177 in January and has been fighting to rebound ever since.

It was the largest and most direct vote of confidence for Bitcoin from Wall Street yet.

For about a year now, Wall Street has been sniffing around Bitcoin. The Big Banks see Bitcoin as a potential threat, but at the same time realize that they could exploit this new “fintech” for their own gain.

Regardless of the motives, Wall Street’s stamp of approval will grease the wheels of mainstream adoption of the digital currency. That’s why the news had an immediate impact on the price of Bitcoin.

Along with the Goldman announcement, several other pieces of positive news also buttressed the price of Bitcoin.

Price of Bitcoin Also Up on This Exchange News

Coinbase is one of the biggest Bitcoin startups, having raised a total of $106 million of venture capital. It has an estimated valuation of $471 million.

The UK Coinbase Bitcoin exchange is major step toward the company’s goal of becoming a global leader in facilitating the use of the digital currency.