The following share-price jumps underscore just how much money there is to make in the merger and acquisition (M&A) market - if you know how to choose the right buyout targets, that is.

The reason: The maker of set-top boxes and broadband networking gear agreed to be acquired by industry leader Arris Group Inc. (Nasdaq: ARRS) in a deal worth $2.1 billion. 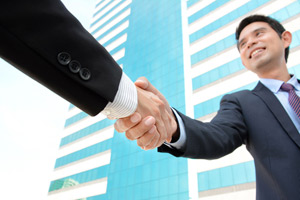 And on March 30, insurer UnitedHealth Group Inc. (NYSE: UNH) said it was buying Catamaran Corp. (Nasdaq: CTRX), sending shares of the Illinois-based pharmaceutical benefits manager up nearly 25% in one day.

I expect to see a lot more M&As through the end of the year. Indeed, a recent report shows that first-quarter global M&A activity reached its highest level since 2007.

With that in mind, today I want to introduce you to three companies that I believe are good Tech Takeover Targets. And I want to show you how to invest in them before they get picked up and their share prices soar.

After all, there's no money in the M&A market if you wait too long to make your move...

When it comes to M&As, 2015 is off to a roaring start. Thomson Reuters recently reported the total value of global M&A hit $811.8 billion.

No, that's not an annual figure - that's just the value of all deals announced in the first three months of this year.

Thomson Reuters says U.S. firms account for the largest share of the global M&A market. All told, American companies announced $399.1 billion in M&As in 2015's first quarter, or 49% of the world's activity.

That's in no small measure because of the health of the tech industry. Overall, tech firms are reporting strong growth in sales, cash flow, and profit margins.

In fact, the strong first quarter follows what the analysts at PwC say was a "banner year" for the U.S. technology M&A market. According to PwC, the volume of U.S. tech deals increased 36%, and the volume of deals jumped 62% - to 235 M&As worth $145.5 billion.

However, as someone who's spent well over 35 years in and around Silicon Valley, I've gotten pretty good at that art. It all comes down to catalysts - acquirers are looking for good fits and solid reasons to act now.

And after running those numbers and then taking a good, hard look beyond them, I think I've identified some pretty good catalysts - and, therefore, some companies that I believe will get bought out within the next year or two.

Let's examine a few of these Tech Takeover Targets - all three are stocks you should take a look at...