For May 5, 2015, here's how the stock market did today, earnings reports, the top stock market news, and stocks to watch based on today's market moves... 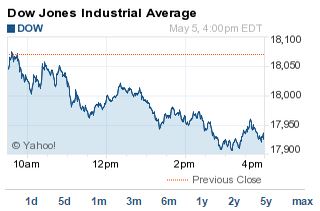 The DJIA Index slumped 142 points on weak economic trade data that suggests the U.S. economy contracted in the first quarter. Although GDP registered at 0.2% growth during the first reading last week, a surge in imports to levels not seen since October 2008 hints that future revisions might trend downward.