Downstream operations include everything that takes place after the production phase. These can range from refining and distribution to sales of the final product.

The refining segments of these oil and gas companies have picked up the slack lately. Refining units drag down earnings during high oil price periods. That's because high prices squeeze margins on refined products like gasoline, whose prices are lowered by excess supply.

"For years refining has been the ugly duckling in big oil companies' portfolios," The Wall Street Journal reported, "but the sharp drop in crude prices has boosted the sector's profitability."

Here's how the Big Oil companies performed last quarter, and what to expect going forward… 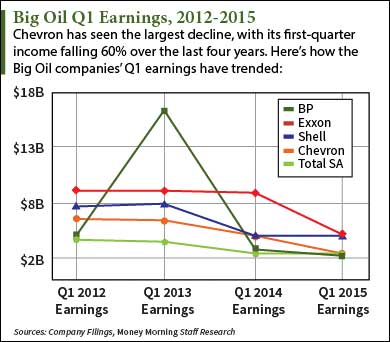 BP was the first of the Big Oil stocks to release Q1 numbers.

It posted an overall profit of $2.1 billion, marking a 40% decline from the $3.5 billion reported last year.

The firm's downstream sector, including refining and chemicals production, raked in $2.1 billion. That's more than double the company's downstream profit from Q1 2014.