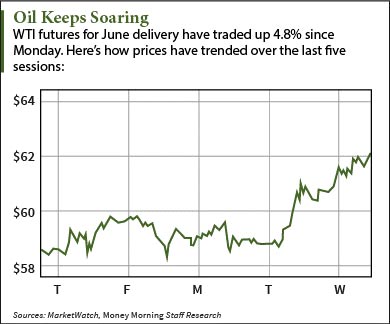 How much is a barrel of oil, 5/6/15: Oil futures maintain their month-long winning streak today amidst geopolitical concerns in Saudi Arabia, Yemen, and Libya.

Brent oil prices moved slightly less. They gained 2.5% to $69.21 a barrel. Prices for the London benchmark have increased 13.1% this year.

Yemen sits on the Bab el-Mandeb strait. According to the Energy Information Administration (EIA), 3.8 million barrels of oil and "refined petroleum products" pass through the Bab el-Mandeb each day. It's the world's fourth-busiest chokepoint.

Tensions have also been high in Libya. Zueitina – an oil port in the northeastern part of the country – has been shut down by protestors seeking employment at the facility. Zueitina exports up to 70,000 barrels a day.