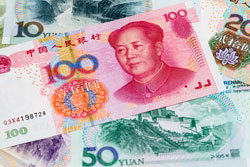 The "Red Dragon" is awakening and the Chinese yuan has taken another swing at the U.S. dollar's security as reserve currency.

The International Monetary Fund (IMF) has begun debating whether the Chinese yuan should be included in the IMF's Special Drawing Rights (SDR) basket of currencies, the Financial Times reported.

The SDR is not a currency, but rather "a potential claim on the freely usable currencies of IMF members," according to the IMF website. The current basket includes the dollar, the yen, the euro, and the British pound sterling.

If the Chinese yuan is confirmed as an SDR currency, it signifies a growing interest within the international community in the yuan as a reserve currency - a widely used asset to settle international transactions.

German and Australian finance ministers support the move, according to The Wall Street Journal. The fact that the IMF is even considering this action is as much an endorsement of China's growing role on the global economic stage as it is an indictment of the U.S. dollar and other currencies.

China has long been vilified for a number of reasons and for many critics its emergence as a global economic powerhouse has been thought a farce.

Detractors have called China a currency manipulator. They say it has stifled wage growth and kept labor costs low to weaken the Chinese yuan and bolster its exports, all while exporting deflation to the rest of the world, but primarily the United States.

But China's principal role as a "currency manipulating" exporter is changing. The middle class is growing and the Red Dragon is no longer content to sacrifice a higher standard of living at the altar of roaring export growth.

"They've had the largest economy for 18 out of the last 20 centuries. They will have periodic fits and starts just like we have," Money Morning Chief Investment Strategist Keith Fitz-Gerald said. "The difference is, they're driven by 1.3 billion people that want to live the way we do, an economic machine that is still very much in growth mode, a working population that is a prime age - 18 to 54 - and they've got $3.1 trillion in reserves. We're $221 trillion in the hole."

China skeptics have been emboldened in 2015 by reports of slowing growth. And they continue to refer back to the same problems again and again.

There is a theme in all of this criticism.

Recently, China also opened up its domestic bonds to foreign investors. China's SDR push is yet another step in a much larger endgame for China.

"They will be the world's most sophisticated financial markets over the next ten years. They will absolutely supplant London and New York," Fitz-Gerald said. "They are rapidly modernizing their financial system... they've got futures, they've now got derivatives, they're beginning to bring their intellectual law up, their property law, their legal system - all the necessary implements for a true capitalist market are being put in place right now in China and they are not going to back down."

This modernization is all happening as the China bears seize on the headlines trumpeting China's slowing growth.

There is a much more worrying shift taking place - one that threatens to dethrone King Dollar and reassign the U.S.'s role from a global economic powerhouse to a second-tier currency issuer...

The Chinese Yuan's Shift to Power

Once you mentioned a modern financial system consisting of derivatives, I was out along with the moral conflict of Communism and the fact we should have never done business with China. It's all about the money. Derivatives are about betting on failure and they are not modern but an extreme example a society way out of balance. It's a sickness and must be stopped along with fast trading which needs ro be taxed.

any business man do business in china will find US$ eccentric value has degenerated downward spiral trend. exsample: 1965 8RMB : 1US$. october 2014 china trip exchange rate was 6.5 RMB :1 US$. once US$ meltdown comes to light, yuan (RMB) will be major currency player. whether IMF recognize or not, china currency can thrive on its own while the world carry on its arrogant fanfare. I would propose to drop the Yen on the IMF listing and substitute Yuan (RMB). US$ currency is manipulated by the US federal Reserve Board, to me is tandamount to bank robbery. why? because its currency is over-valued, not gold backing. how could anyone justify US$ worthiness when the gold reserve was just in billions while the deficit is in 17 trillions? that's why china is buying tangible assess in US to offset US bogus currency.

As long as we have the Largest Oil Deposits in the World, and China has none, The Dollar Will probably remain the worlds reserve currency.

Katie May
Reply to  Thomas Dawson

I wonder if that is true. As long as OPEC continues to trade only in the US dollar, we should be good, but if they convert to yuan, or other currencies, our oil might be something we need to sit on for ourselves and we may face issues in the global economy. And then there is the arms trade…

Apparently, the U.S. Dollar is "done". Better trade-in old dollars (Abe Lincoln) for new Yuan ( Mao Tse Tung ). However, you still need to keep some "walking around money" here at home. Additionally, buy some gold and silver, just in case. Stock-up on food, guns, ammo, and water ( yes, there is a drought in Calif.). A bomb shelter would also be helpful in case of a national calamity. Keep you suitcase packed. You "never know what tomorrow will bring". Sleep well, my friends.

I have been telling folks the very same thing.

So, what is the thought of buying Yuan now before IMF makes announcement in october
and probably allows Chinese currency to be recognized as true reserve currency?

The unobtrusive socio-economic factors of creative navigation of change, sustainable growth, robust financial system, preemptive positioning of investments, a highly digitized economic system (an undervalued resource) all combine with a consummate political will of Western democracies to shore up the US dollar. Most of developed and developing economies of the globe stick to the US dollar with passion. To them, the dollar has a preferential acceptability over the Chinese Yuan. The US economy and dollar have in recent times, gradually waxed stronger and gained greater international respect, thanks to the unsung but astute management of its recovery from 2008 to date. There are positive indices of continued future growth. The reverse appears to be the case with Chinese economic trends, to wit; the worrisome US Current Account Deficit position of $807 billion in 2008 improved steadily to $403 billion in 2013 (50%), while the Chinese Current Account Surplus position in the same period, declined at a faster rate from $420 billion to $183 billion. My prediction is that by 2018, the US will have a slim Current Account Surplus while China will experience its first Deficit this second decade. By 2020 the issue of replacing the US dollar as Global Reserve Currency, with Chinese Yuan would have been tucked away in the cooler. Dr. Lasbrey Uzoma Nze, Chicago, USA.

"By 2020 the issue of replacing the US dollar as Global Reserve Currency, with Chinese Yuan would have been tucked away in the cooler. Dr. Lasbrey Uzoma Nze, Chicago, USA."

Why? U.S. is a dynamic society. It is characterized by a "can do frontier spirit of innovation and change".

Our ace in the hole now: Shale oil revolution. Its potential as an export commodity is a huge advantage to the U.S. (This is my strong opinion on the shale oil revolution. It is a big plus for the U.S. and it is going to correct past mistakes, if this oil and its derivatives are allowed to be exported out of U.S..)

U.S. will be the OPEC of the world and our balance of trade will be tipped in our favor to keep U.S. strong and viable and our dollar reserve currency status safe for at least the next decade despite the emergence of the Yuan.

I've been hearing all this Dollar replacement hooey for a while now. I'm so sick of this speculation on how the dollar will collapse. The dollar did plenty of falling while we saw QE over and over again in this country. Now the tide is turning. I'm waiting for the coming rise in interest rates and riding that rocket course the dollar is on already. We are in the midst of a historic dollar rally. I don't see it ending any time soon. I think it is great China is finally joining the big boy club. Maybe they will be willing to let their currency freely trade on the open market with out any peg and see how she fares.

What these nasty Global Elites have been doing manipulating Nations economies for far too long now and should be put to an end the citizens of our Nations should throw them all in the Pits where they belong their nothing but the most Debase Crimminals in the World They create all the political, social ,
And Economical problems we Face Globally with their Distraction tactics Etc. and as always at the Expence of the Citizens in every way they can it's time for the people to stand up and unite together and Dethone all of these Global Elite Pestilence they absolutely do not care about anybody's welfare except their own .