Now that two of Wall Street's biggest names have put an unusual "sell" rating on Microsoft Corp. (Nasdaq: MSFT) stock, investors might be tempted to dump shares of the tech giant.

That would be a mistake.

But before we get into why Goldman Sachs Group Inc. (NYSE: GS) and Citigroup Inc. (NYSE: C) are wrong about Microsoft stock, let me share with you what they don't like about the Redmond, Wash.-based company.

Goldman was the first to make the negative call back in early April. 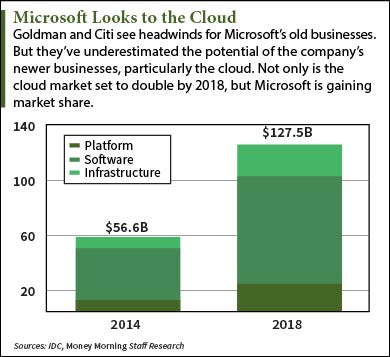 "We are reiterating our Sell rating on Microsoft, as we continue to see risk to both revenue and EPS forecasts for the remainder of this fiscal year, as well as for FY16 and FY17," wrote Goldman analyst Heather Bellini. "We see consensus estimates as too aggressive."

"We rate shares of Microsoft a Sell. We believe shares are being buoyed by excitement around new CEO Nadella and cloud services," wrote Citigroup analyst Walter Pritchard. "MSFT is wrestling with difficult strategic issues where we believe there are no easy answers."