Alibaba officials reported earnings per share (EPS) of $0.48 on revenue of $2.81 billion. Analysts had expected EPS of $0.42 and $2.77 billion in revenue. The revenue figure was 45% higher than last year. 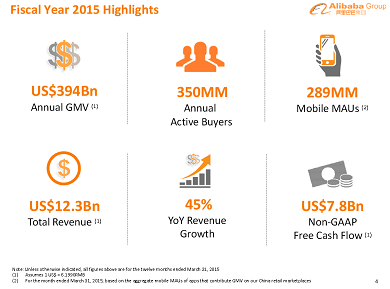 Alibaba also announced that Daniel Zhang will be taking over as the firm's CEO. According to Executive Chairman Jack Ma, the move is part of a larger effort to bring young leaders into the company. Zhang, 42, was previously Alibaba's COO.

Another bullish number in today's report was gross merchandise volume (GMV), or total money spent over Alibaba's platforms. GMV in the March quarter was $97 billion. That was an increase of 40%. For FY 2015, GMV was up 46% to $394 billion.

GMV was boosted by strong user growth. Alibaba now has more than 350 million monthly active users. By comparison, the entire population of the United States is just 319 million.

While those announcements all contributed to BABA stock's rise today, there's one figure that's much more important…

The Most Important Number in Today's Alibaba Earnings Report

As we've said at Money Morning since the Alibaba IPO, the most important part of Alibaba's business is mobile.

"Alibaba is gaining traction in its home market in China just as that country's people are truly joining the Internet revolution," Money Morning's Defense and Tech Specialist Michael Robinson said. "And the development of easy-to-use mobile commerce is giving Alibaba a strong tailwind."

Alibaba said revenue from mobile climbed an incredible 352% in the March quarter to $846 million. The company announced that mobile revenue now accounts for 40% of total sales.

Alibaba did note that its mobile monetization rate – the measure of revenue per purchase – slipped to 1.73% from 1.96% last quarter. But the company attributed the fluctuation to seasonality.

Those investments are starting to pay off.

And they're a major reason why our experts are incredibly bullish on BABA stock. Here's how high they see the BABA stock price climbing…

I look forward to your investment insight.