Knowing how to buy silver lets you take advantage of great silver buying opportunities – like the one we have now.

Silver prices have been in the doghouse for some time. After peaking at $49 in April 2011, the precious metal has given back 66%. It's been flagging around the current $16 range for the past seven months.

But a couple of key indicators show the price of silver is both cheap and could be set to rocket higher.

To make sure you get a piece of the profits, we put together these steps on how to buy silver today…

First, let's take a look at why silver prices are headed higher.

While that leverage looks exciting, investors still need to heed the inherent risks and recognize it's a double-edged sword.

Since those highs, gold has retreated 37%, while silver's off by 66%. Again, that nearly 2:1 magnification shows these while silver typically follows gold's price movements, silver is more volatile.

Because silver and gold are highly correlated, one useful tool to gauge silver's price relative to gold's is the gold/silver ratio. 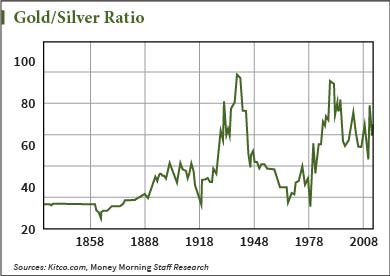 We calculate this indicator by dividing the gold price by the silver price, which currently yields about 72. That means right now an ounce of gold will buy roughly 72 ounces of silver.

Historically, that ratio has been closer to about 16. On that basis, silver is still very cheap.

If we look at the gold/silver ratio since the current bull market began in 2001, it averaged closer to 55 before the 2008 financial crisis and stock market panic.

As this bull market progresses, I believe the gold/silver ratio will not only return to its pre-panic average of 55, but will ultimately peak somewhere closer to 20.

What does that mean right now?

With silver prices headed higher, now's a great time to add silver to your portfolio. Here are a few ways to do it…

Silver Coin dealers have no "junk silver" left in their vaults ever since last August.

Hi Peter…. do you have a list of good Australian refiners who produce"Good Delivery" bars?

This is the most stupidest analysis I have ever read about gold and silver ratio. I doubt that silver has that higher sentiment attached to it any more.

Also Silver's jwelery demand has flatened out for past 10 years . no significant growth in Demand and Supply. And hence a revival in industrial manufacturing and electronics market will only bring next boom. And china is biggest manufacturing hub, hence any revival in china will cause increase in silver prices.

Secondly, traders are still using Gold and Silver as hedging tools against more volatile market investments. So now question arises what will happen when country like India (3rd largest importer of silver) brings in a policy which will make silver and gold investment less lucrative?

Do let me know if you have any deeper insights on it. Happy to discuss and argue :)

I think exactly the same. The demand of silver is getting less. (As a country reservation or jewelry)
People keep saying that silver is more useful than gold in the industrial market. But there are many substitution to silver's property (my opinion without fact)

From this, the gold to silver ratio should go higher than 70, not less.

How can silver possibly go to higher?