Not long ago, I told you the new Apple Watch will be one of the major catalysts that will drive Apple stock to a $1 trillion market cap.

Well, my own watch finally showed up the evening of May 1, and I've been testing it out ever since.

After using it for a few days now, I've come to believe that this is a truly great product. If anything, my latest Apple Inc. (Nasdaq: AAPL) share-price predictions were too conservative.

But don't believe me. After all, I'm a big Apple fan and maybe my enthusiasm is getting the better of me.

Instead, today I'm going to share a conversation I had with one guy who's literally on the front lines of Apple's latest success.

Here's what he had to say…

You can imagine how excited I was when I got an email from Apple telling me my new watch would arrive on Friday, May 1.

When I saw the UPS truck show up at my driveway about 6:30 that evening, I felt like a 5-year-old boy on Christmas morning. The driver handed me the package, got my signature, and then said something that caught my "investor's ear."

"Lucky you," he said. "I've been delivering these things all day long. We have tons of them lying around, whole pallets of them waiting to be delivered."

There's an important lesson in this brief conversation. After 35 years covering Silicon Valley, I know that a powerful anecdote can be as illuminating as reams of data. 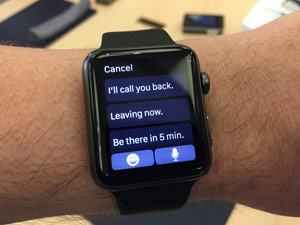 And I believe that UPS driver's story proves Apple has a winner in the making.

Morgan Stanley projects Apple Watch sales of 30 million to 60 million units in the first year. Using an average price of $400, that could mean annual sales of $12 billion to $24 billion.

My own forecast is far more conservative. I originally thought the company would sell about 10 million watches in their first year on the market for roughly $4 billion in sales.

I now believe that sales number will come in closer to 12.5 million.

Make no mistake. The Apple Watch is a great product. Indeed, of all the iDevices I've used over the years, this is already my favorite.

I am a Apple stock holder w/ very low cost basis. Those who bought later on at higher prices must take greater risks and have less leeway. So, I can make money no matter what. If Apple goes up, I make more. If Apple goes down, I still make money. If it goes sideways, I collect a modest dividend. Can't really lose. Eat your heart out.

Greece and the Euro, global growth concerns, weak domestic economic data, and Janet Yellen are all putting a dampener on the stock market and Apple ( a distinct bellwether). I have been closely monitoring Apple for the past three months. It has NO momentum. Its earnings for first Quarter were slightly weaker than the previous quarterly report. I would suggest it would be wiser in the intermediate term to show some cautious optimism. Avoid manias, crowd following, and cheer leading.

I ordered my Apple watch 10 minutes after the sales started, and were told it would be shipped between May 13 and May 27th. I received a note that it was shipped and actually arrived on May 13th!

After using it for couple of days without any instructions, it feels much better that what was described and I think it will be a hugely successful product which also changes how interact with computers. It provides all kind of health information, I can use the speakerphone to answer calls when in private without taking the iPhone off my pocket, it knows my favorite stocks, I get HomeKit related notifications, can see my calendar on it, and much more.

Thanks for the Apple update Mike on the watch and the future sales' projections. Can it possibly get any better in the technology for tech investment opportunities? I believe we are in for some exciting profits. Keep'em coming!

It is exhilarating to learn of the success of the Apple watch being a stock holder.
I am contemplating to order the Apple watch for a special occasion.
I might succumb to the temptation earlier and get it soon !