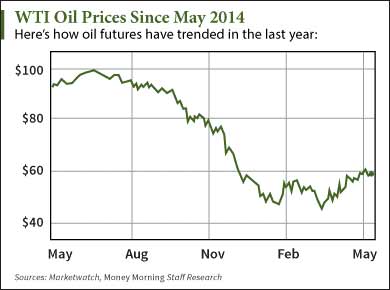 Oil prices have rebounded for two months, but are still down 35% from June highs.

Today's low prices mean it's a great time to find the best oil stocks to buy now, at a discount.

You see, oil prices are starting to rebound despite hovering near $60. That's because the market is reacting to increasing demand and mergers and acquisitions (M&A).

According to Money Morning's Chief Investment Strategist Keith Fitz-Gerald, the M&A "chaos in the energy sector" is an event of Darwinian proportions. While oil currently trades near $60, the strongest companies survive while the smaller firms are either acquired or run out of business.

It all began when Saudi Arabia started the "oil pricing war" six months ago...

On Nov. 27, 2014, Saudi Arabia pulled the rug out from under the oil market by refusing to decrease production. The country decided to maintain its output of 30 million barrels of oil per day. The move stunned other OPEC countries and started a price war with the United States.

Oil prices fell more than 4% that day. Most energy investors saw that as the beginning of the end. Futures tumbled another 17% by the close of 2014.

"Instead of sending U.S. oil producers packing like they planned, the Saudis have actually created an environment where the best managed, best capitalized energy companies are hunkering down, flushing out the weaker players, and emerging stronger than they were before," Fitz-Gerald noted.

The oil field services giant reported Q1 earnings on April 16. It beat earnings expectations, posting a $1.06 earnings per share versus the $0.91 analyst estimate. SLB stock leaped more than 2.3% in pre-market trading that day.

These measures boosted Schlumberger's first-quarter profit margins to 24.1%. That beat analysts' expectations of 22.5%.

"My point is that here you have a perfect example of a company that is doing better in an industry for which expectations are absolutely terrible," Fitz-Gerald explained. "The short-term price dislocation that everybody is so worried about is nothing more than a speed bump in the longer-term scheme of things."

For investors, SLB stock is not the best play right now. Fitz-Gerald gave us two other oil stocks to buy now that offer a better profit opportunity...

Two of the Best Oil Stocks to Buy Now