The ride-hailing startup Uber is in a round of funding that could value the company at an astonishing $50 billion, according to a new report from The Wall Street Journal. 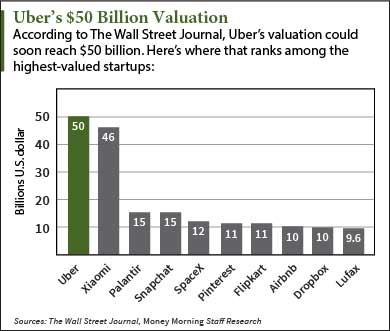 For investors, that also means there will be another delay for the Uber IPO. No Uber IPO date has been set yet.

According to the report, Uber is looking to raise between $1.5 billion and $2 billion in this round of funding. That will likely allow Uber to forego an IPO through the rest of 2015.

The massive valuation sets up the Uber IPO to be the most hyped public offering since the Alibaba Group Holding Ltd. (NYSE: BABA) deal of September 2014.

Uber has grown at a tremendous rate. In May 2014, the San Francisco-based company was valued at $18 billion. Its value topped $40 billion by December 2014.

The Journal has also reported that Uber's 2014 revenue was roughly $400 million. At that rate, Uber is now worth more than 125 times its trailing revenue. But the company expects revenue to soar to $2 billion this year.

If Uber comes to market with a $50 billion valuation, it will already be bigger than 406 companies in the S&P 500. Household names like Twitter Inc. (Nasdaq: TWTR), Yahoo Inc. (Nasdaq: YHOO), and CBS Corp. (NYSE: CBS) would all be smaller than Uber.

The second-highest valued startup now is Xiaomi Inc., a Chinese smartphone company. Xiaomi is worth $46 billion. After those two there's a big drop off. The third-largest startup is the software company Palantir Technologies Inc., valued at just $15 billion.

There's no question the Uber IPO will be one of the biggest financial stories when it does happen. But the company still has some major problems to sort out before it can host an initial public offering…

Here's the Biggest Threat to an Uber IPO