Of course, this has brought back some rather specious arguments by talking heads on TV and pundits spinning the next Armageddon scenario.

The latest is about how rising oil prices will prompt more volume to come online from a particular type of well (called DUCs), sending oil into another tailspin.

I'll deal with that in a minute, but first let's address those pundits…

Here's the Tale Being Spun by the "Short" Gang

You should take away from recent trading sessions one salient fact. Despite intermittent pauses, we stand today with the pricing floor for oil rising. Both WTI and Brent have been ratcheting upward steadily over the past month. 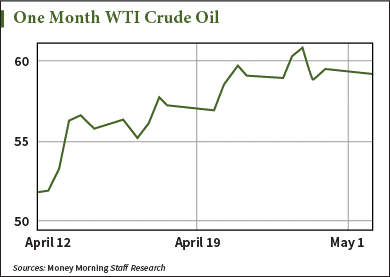 In mid-afternoon trading yesterday we saw another uptick in both WTI and Brent, moving up – yet again.

I expect some further pullback as traders wrestle with the collision among crude prices, rising interest rates, and the overall strength of the dollar. But one thing is clear. The ratcheting effect I have been talking about – in which oil has an overall trajectory in one direction (in this case up) despite volatility in the other – is taking shape.

But there are analysts who disagree with me, and that's what I want to talk about today.

Let's go. It involves the thousands of wells drilled by U.S. operators which could be quickly turned into completed wells. The reasoning concludes that any protracted rise in oil prices will prompt companies desperate for revenue to complete the wells and drown the market in new volume, thereby sending crude into another tailspin.

Well, I have one word for this bit of creative fiction…

Aside from yet another example of why these lost souls need to take a course in Drilling Oil 101… it is simply misinformation masking as analysis. 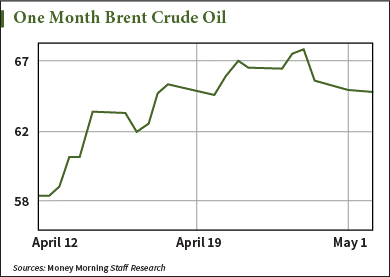 Companies have always had a program of drilling wells and then completing them later. This type of well is called a DUC (for "Drilled but UnCompleted).

When prices are in excess of $80 a barrel (last summer, for example) and domestic demand is rising, DUCs are of no consequence.

But when concerns emerge about excess production and low pricing levels, when these wells kick in becomes the topic of conversation.

No wonder that the "explain the situation in a 30-second sound bite" crew would latch on to it. Remember, most attempts to persuade you that the price of oil is going down have a sponsored short position just below the surface.

An analysis of the current state of DUCs indicates those using them to advance a bearish oil outlook may have seriously overstated the problem. Figures tell us the number of U.S. wells drilled over the past three years has averaged about 12,500 a year. At any given time, there are slightly more than 3,500 wells "in preparation."

Yet there are no signals that companies re-drilling more wells with the express purpose of turning them into DUCs are awaiting a further rise in prices. In fact, after surveying some two dozen of the largest American E&P (exploration and production) companies, the analytical team at Bernstein has recently concluded no more than 400 of the wells drilled can be considered DUCs.

Even then, evidence indicates that some of these – perhaps as much as 25% of them – are meant as replacements for already producing but maturing wells. In other words, about 100 of these DUCs are not expected to add a single drop of additional oil to the total production nationwide.

Yet even if there were no replacement wells in the figures, the increase would be marginal at best. Should every one of these wells be completed, comprise new net volume additions, and be put into production at the same time, estimates put the aggregate additional oil coming on the market at no more than 80,000 barrels a day (and that is on the high side of the projections). Such an increase amounts to less than eight-tenths of one percent (0.8%) of total daily American production, easily absorbed by the rising demand.

And even then, all of my industry sources tell me that if their companies had DUCs in their planning cycle, the intention would always be to complete and release the volume slowly through the end of 2016.

Even if there were far more volume available from DUCs, nobody in their right mind would flood the market short term, guaranteeing a decline in profits. That would be the budgetary equivalent of shooting yourself in the foot. Known oil, in place and easily retrievable, is a known (and booked) asset.

But that does not mean it is cheap.

And here is the major reason why DUCs do not pose any significant problem for oil prices.

When do you think we'll get some good news about Linc Energy and what does the present price on affect the company?

It is so true about the "30 second sound bite". What a fantastic tool for the short seller.

All my positions in oil are long and now after reading your article I will stay the course.

Very interesting analysis as I thought there were thousands of these wells, but clearly you indicated otherwise. Thanks for the insight.