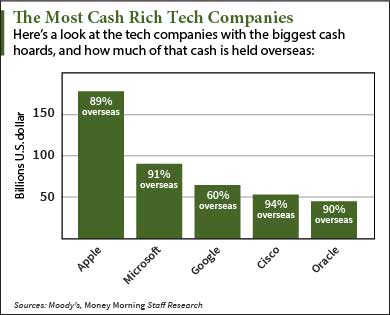 Five of the United States' top tech companies have more than $430 billion in cash combined, according to a new report from Moody's Investors Service.

The majority of that money is being held overseas so they can avoid the United States' high tax rate.

The federal corporate income tax rate in the United States is about 35%. That's the highest rate among developed economies. But as long as these companies don't bring this money back to the U.S. and reinvest it, they don't have to pay that high U.S. tax rate.

This is why Ireland is one of the most popular locations for U.S. companies to store their cash - its corporate tax rate is just 12.5%.

Top tech companies don't typically divulge exactly how much they're saving in taxes, but in 2013 Microsoft did note that it saved almost $30 billion by keeping cash abroad.

"Despite stronger returns of capital to shareholders, we expect the concentration of cash in the technology sector to grind higher over the next year," the report said.

While the U.S. government may be missing out on tax revenue, investors have seen major profits from these tech firms in 2015...

In 2015, the tech-centric Nasdaq Composite is up 5.5% compared to a gain of just 1.4% for the Dow Jones Industrial Average.

"For its part, the Nasdaq is much more of a growth story," Money Morning's Defense and Tech Specialist Michael Robinson said. "It's brimming with younger, more aggressive firms in growth fields like biotech, the mobile revolution, cloud computing, Big Data, and the connected car."

Yeah the poor pays their taxes every year what's new.the government lets them do it . We need someone in the White House who cares about the middle class and the poor.

A point to ponder; these five companies: Appl, Msft, Goog, Csco, Orcl, along with other U.S. companies keep their cash in Ireland because the corporate tax rate there is 12.5%. Is that why Ireland's economy is in a recession and without seeing any brighter days ahead??