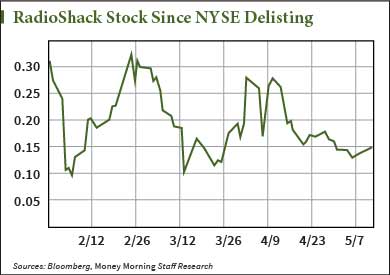 RadioShack stock is still trading. What's more – it has been up as much as 234% since the electronics retailer delisted from the New York Stock Exchange then filed for Chapter 11 bankruptcy in February 2015.

That's not an endorsement of RadioShack Corp. (OTCMKTS: RSHCQ) stock. Nor are we suggesting that you employ some kind of highly risky day-trade strategy in hopes of pocketing big gains on RadioShack stock.

But after all the financial trouble this company has gone through, and being delisted, why is RadioShack stock still trading right now?

The Real Value of the RadioShack Stock Price

The short answer is RadioShack stock is still trading because people will trade anything when there's money to be made off it, speculative or not.

Delta Air Lines Inc. (NYSE: DAL) did it. They filed for bankruptcy protection in September 2005 and climbed out of it in April 2007. Today, they're the largest airline by market cap in the world.

But Delta is very different from RadioShack.

Delta was filing bankruptcy at a time when several other airlines were also in bankruptcy protection. And even when Delta did come out of it, not a single share in the new company was issued to the traders playing the over-the-counter stock.

According to the UCLA-LoPucki Bankruptcy Research Database, only 14 of 85 companies that reorganized following a bankruptcy gave anything to shareholders between 1997 and 2012. That's because in bankruptcy the creditors are the first to get paid while shareholder equity is almost always completely wiped out.

RadioShack did file for Chapter 11 bankruptcy, which doesn't guarantee a complete liquidation of the company like Chapter 7, so it's not completely hopeless that RadioShack reorganizes.