The pharmaceutical industry is one of the most profitable sectors in the world.

And the biggest names in the pharmaceutical industry are bringing in billions annually. Here's the complete list of pharmaceutical companies by revenue in 2014: 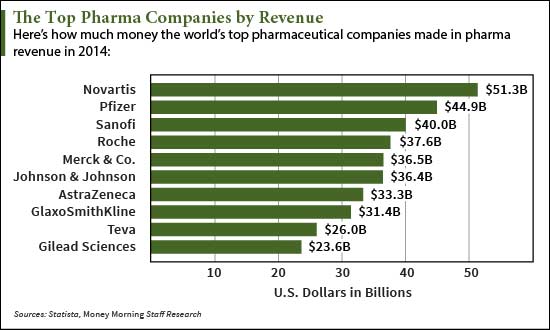 This chart shows the revenue generated by pharmaceuticals alone. For example, Johnson and Johnson (NYSE: JNJ) total sales were $74.3 billion in 2014 for the entire company. Pharmaceuticals accounted for $36.4 billion of that total according to the research firm Statista.

Pfizer Inc. (NYSE: PFE) is next on the list with pharma revenue near $45 billion annually. Its drug Lyrica, which treats diabetic peripheral neuropathy, is the company's biggest revenue generator with $5.1 billion in 2014.

Third on the list of pharmaceutical companies is Sanofi SA (NYSE: SNY) whose own diabetes treatment Lantus brought in $6.3 billion in 2014.

It's a play on the entire market, and it seen gains more than seven times higher than the Dow Jones Industrial Average in 2015...

How to Profit from the Most Lucrative List of Pharmaceutical Companies

And the best part about the investment is that it's a play on the pharmaceutical industry's $166 billion M&A trend of 2015. You see, with all the cash these companies generate, they are able to easily scoop up other competitors or rising companies.

So far, $166 billion has been spent on M&A in the pharma industry this year, and it shows no sign of slowing down. And Robinson's investment will continue to profit from it...