Former Treasury Secretary Tim Geithner was as close as it gets to the epicenter of the 2008 U.S. financial crisis.

Together with Treasury chief Hank Paulson and Fed boss Ben Bernanke, he presided over the crisis at the Bush administration, which let the conflagration get out of control. He then led the Obama administration's response.

As such, Geithner allowed the country's big banks to become wards of the state (which they are to this day) that can suck up and spit out taxpayer money as they see fit. Banks can make massive bets and, if they lose, no problem – they're financed by the taxpayers.

Yes, Basel III and Dodd Frank and MiFID require more capital, but they're all run by regulators who will someday work for banks. Oh, speaking of which….

Geithner's policies set the lending standards that would eventually support the rapacious private equity barons who would hire him, Warburg Pincus, in a tedious example of the government-Wall Street revolving door.

But what is probably worse: he was instrumental in setting the stage for the next crisis which, in his own words, is going to happen.

You can prepare for it. But first a little background…

As a shill for the establishment, Geithner was ideal. 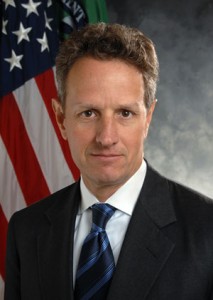 After being anointed an appropriately pedigreed Dartmouth grad, he was groomed by secretive consulting firm Kissinger Associates, then joined the Treasury's International Affairs Department in 1988. Later, he was an attaché at the U.S. Embassy in Tokyo, then after a couple of promotions, became undersecretary of the treasury for International Affairs under Rubin and Summers – the two men who had the most to do with the disastrous dismantling of financial regulation at the end of the Clinton years. Sadly, both of these men appear to have had considerable influence on him.

More famously and more recently, Geithner served as president of the New York Fed and vice chair of the FOMC, working to reduce the capital that banks were required to hold. He had a hand in the rescue and eventual sale of Bear Sterns, and supported Treasury Secretary Hank Paulson when he decided to bail out AIG after allowing Lehman to fail just two days earlier.

During his hearings, Geithner proved unable to pay his taxes, despite using the $50 Quicken program upon which he relied. Nonetheless, despite this clear evidence that he was unfit to oversee the Treasury and the IRS, Geithner was named Treasury Secretary under Obama, succeeding Paulson.

Today, his legacy is littered with financial roadkill.

Geithner oversaw disbursement of $350 billion of the original $700 billion of TARP bank bailout funds Congress passed. Especially controversial were bonuses paid to AIG executives after the company received over $170 billion in bailout money from the federal government.

Worse yet, banks that had AIG insurance contracts against losses were fully paid out even though the market value of those contracts was considerably lower at the time.

During Geithner's confirmation hearings, he claimed the new Obama administration saw China as a currency "manipulator," which of course is not unlike the pot calling the kettle black.

Geithner was outspoken in his opposition to extending the Bush tax cuts for wealthy Americans, thinking that they would sock away rather than spend the savings. Also, Geithner fought hard regarding the fiscal cliff to increase the 2013 debt limit, playing chicken with Republicans over their unwillingness to increase taxes on the wealthy.

Is there a silver ETF structured like PHYS to recommend?

Thanks for your question. In fact, yes, there is a silver ETF like PHYS.
It's also managed by Sprott. It's the Sprott Physical Silver Trust ETF (NYSE:PSLV). Please do your due diligence.

Bravo Mr. Krauth for calling a spade a spade … in this case calling a sociopath a sociopath. Little Timmy is a prime example of everything that's wrong with crony, disaster "capitalism" and the corrupt government entities and banking cartel that pretend to "regulate" it.

The whole thing's a colossal fraud.

The fact that he managed to siphon taxpayer money to payout 100 cents on the dollar to Goldman on their busted AIG CDS contracts constitutes a criminal act in my book. You KNOW he's getting his payoff now through some backdoor.

THANK YOU having the courage to speak the unvarnished truth. This was a superb little gem of an article.