For May 18, 2015, here's how the stock market did today, earnings reports, the top stock market news, and stocks to watch based on today's market moves… 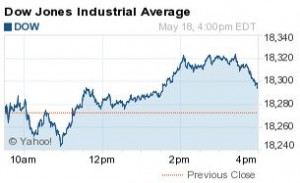 The DJIA Index and the S&P 500 hit new record highs today as concerns about interest rate hikes faded and traders overlooked weakness in the housing markets. Investors also largely ignored concerns raised over the weekend regarding Greece's ongoing debt woes and worries that the nation is on the verge of bankruptcy.

Several deals and rumors of possible mergers drove stocks higher. Oil prices reversed early gained that were fueled by violence and tension in Iraq and Yemen. WTI prices slipped below $60 per barrel this afternoon.