Here are six catalysts driving the price of gold today: 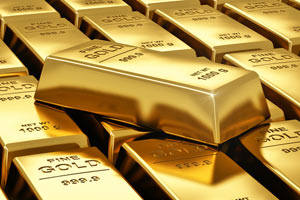 Gold Price Catalyst No. 1: European papers reported over the weekend that financially strapped Greece is perilously close to defaulting on its sovereign debt obligations to the European Union and the International Monetary Fund. Chatter Monday was that Greece came so close to defaulting on a 750-million-euro ($855 million) payment to the IMF last week that Greek Prime Minister Alexis Tsipras warned the repayment couldn't have been made without EU assistance. Additional reports Monday said current talks are not progressing well.

Gold Price Catalyst No. 2: Venezuela's inflation rate has soared to 200%. According to Bloomberg, residents of the South American country are racing to spend their money as quickly as possible. Mushrooming inflation in the country, widely known for its oil industry, has devalued the Venezuelan currency.

Gold Price Catalyst No. 4: Continued concerns over soft U.S. economic data also sent investors into gold. Monday's NAHB/Wells Fargo Housing Market index fell to 54 in April from 56 the month before. Economists were looking for a read of 57 for the index, which measures builders' optimism covering both forward and backward factors. Last week brought a string of dispiriting economic data from slipping consumer sentiment to seriously weak retail sales.

Gold Price Catalyst No. 5: The overall U.S. stock market is looking pricey. The broad-based S&P 500 Index presently trades at 21.5 times its components' net profits for the last 12 months. That's well above the historical average of 15.5, according to The Wall Street Journal.

Gold Price Catalyst No. 6: The consensus sentiment among economists is the U.S. economy is not growing at a quick enough clip to warrant a Federal Reserve interest hike this year. Minutes from the central bank's April meeting will be published Wednesday. Precious metal traders will be closely watching for any signs the Fed may have revised down its outlook for growth and/or inflation. Any such sign would signal a rate hike postponement, which would likely goose the gold price.

Finally, last week's great performance for the price of gold helped investor optimism into this week – take a look…