For May 19, 2015, here's how the stock market did today, earnings reports, the top stock market news, and stocks to watch based on today's market moves... 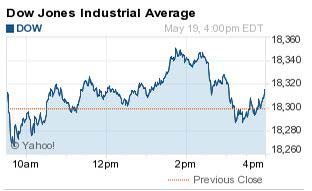 The Dow Jones Industrial Average today eked out a 13-point gain to hit another record closing high. The S&P 500 remained in the red, however, as energy stocks slid and retailers reported weak earnings for the March-ending quarter.