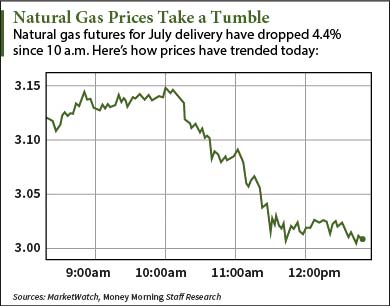 The natural gas futures news comes on speculation that the Energy Information Administration's (EIA) weekly report on Thursday may show above-normal supply gains. Based on the average of three analyst estimates compiled by Bloomberg, the report could show that gas stockpiles increased by 99 billion cubic feet last week.

"It will be interesting to see if the $3 level can survive the inventory number," Bob Yawger, director of the futures division at Mizuho Securities, told Bloomberg. "The market is looking for something close to triple digits, which would be a pretty big number for the week."

"From the rise of liquefied natural gas exports to both Europe and Asia to the transition well underway from coal to gas in the generation of electricity, the ability to produce more unconventional gas is being met by a rise in the demand curve," Moors explained in October 2014.

And that growing demand is a major catalyst for our favorite natural gas stock...