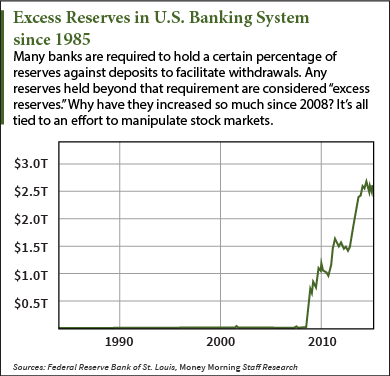 The fact that the U.S. banking system is awash with $2.6 trillion in excess reserves points to nothing more than U.S. Federal Reserve stock market manipulation.

For most of the Fed's 100-year history, the growth of reserves in the banking system was flat - at least relative to the relentless surge Bernanke's tenure brought with it.

Excess reserves totaled $1.5 billion in February 2006 when Bernanke stepped in as chairman.

To say it's "unprecedented" falls short of capturing just how much this central bank intervention turned the Federal Reserve's traditional role on its head.

But it's first important to understand how excess bank reserves work before it can be understood just how this Federal Reserve stock market manipulation has played out...

Banks had traditionally held reserves to ensure liquidity against their liabilities. The Fed has always dictated the ratio of reserves to deposits banks must legally hold, referred to as "reserve requirements." However, given that banks aren't constrained in their lending by these requirements, it has slowly evolved from a safety measure to the primary tool by which the Fed manipulates markets.

Reserves are made up of what a bank holds but does not loan out. This includes both "vault cash" (whether in the form of actual cash in a bank vault or electronic entries on a digital spreadsheet) and cash held at the Fed and other banks.

Excess reserves are any reserves in the banking system in "excess" of these requirements.

The amount of excess reserves helps determine what is known as the "Fed funds rate," sometimes referred to as the interbank or overnight rate. That is, the rate banks will lend to each other in the very short term to ensure that they are within the requirements.

This is where the Fed comes in.

When looking at the banking system as a whole, any reserves in excess of requirements will work to drop the overnight rate to 0%.

Do you really think that this is rocket scientist news? I know the market is rigged and I know that the millionaires in this Country send their money over sea's.
I've know one of the secrets and I am still trying to figure out how our government could have been so bucking stupid! (Not a typo).