Today we want to show you the best way to invest money in tech stocks - which are on fire in 2015.

Through May 18, the Nasdaq has posted a gain of 7.3% in 2015. That's nearly three times the return of the Dow Jones Industrial Average. During the same time, the bellwether Dow is up just 2.7%. 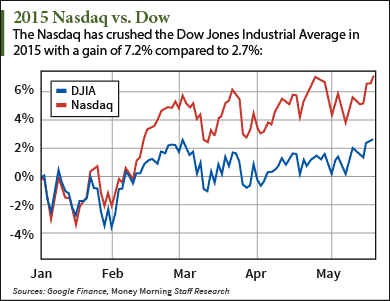 One reason for this Nasdaq climb: the companies it holds...

"For its part, the Nasdaq is much more of a growth story," Money Morning's Defense and Tech Specialist Michael Robinson said. "It's brimming with younger, more aggressive firms in growth fields like biotech, the mobile revolution, cloud computing, Big Data, and the connected car."

And that success will continue through 2015. Robinson says that we've reached a "tech tipping point," which means tech will continue to outperform the markets.

That's why we took a closer look at the best way to invest money in tech today, for maximum profits...

When Robinson refers to the tech tipping point, he means that society cannot get by - hour by hour - without a variety of advanced technology.

And that's just the start...

"Consider what's happening with the mobile revolution," he continued. "The iPhone, launched less than a decade ago in June 2007, was essentially the world's first smartphone.

"These days, tech companies are selling more than 1.2 billion smartphones a year, according to figures compiled by Gartner. And when you look at the broader market for all mobile phones, the numbers are even more impressive."

Just take a look at the growth of the mobile advertising market. Five years ago, the market was basically non-existent.

That's not the only tech market that's expanding...

"A recent study by Goldman Sachs (NYSE: GS) projects the market for software as a service - in which software is licensed on a subscription basis and hosted on the cloud - will hit $106 billion next year," Robinson said. "That's a 21% increase from 2014′s estimated sales of roughly $88 billion."

Forecasters at ABI Research have projected that the number of interconnected devices will hit 1.5 billion by the end of 2015. By 2020, that total is expected to reach 5.4 billion.

Not all tech stocks will take off with the entire industry. Some are better positioned to profit from this growth. We picked these three to start with as the best way to invest money in tech today...