For May 20, 2015, here's the top stock market news today, including how the stock market did, earnings reports, and stocks to watch based on today's market moves... 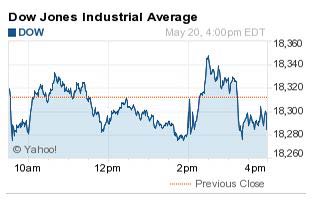 The DJIA Index and S&P 500 retreated from record highs during an afternoon sell-off late in the trading session.

This afternoon, the Federal Reserve released minutes from the April FOMC meeting, at which the central bank removed all calendar references to when it might increase short-term interest rates. According to the minutes, only a few members of the committee felt that economic data was sound enough to justify a rate hike during their June 16-17 meeting. The minutes indicate that central bank members believe the weak first quarter, in which GDP grew by a paltry 0.2%, was transitory and that the U.S. economy will grow at a moderate pace over the balance of 2015. Sentiment indicates a rate hike is likely at some point in 2015. However, a June hike is currently not in the cards.

Investors will now turn their attention to Friday, when Fed Chair Janet Yellen will give a speech at the Greater Providence Chamber of Commerce Economic Outlook Luncheon.