TWC stock has big gains sitting in front of it as suitors line up in a bidding war to acquire Time Warner Cable Inc. (NYSE: TWC).

For long-term investors in Time Warner Cable stock, a good thing keeps getting better. TWC stock is up 20% over the past year and 79% over the past two years. 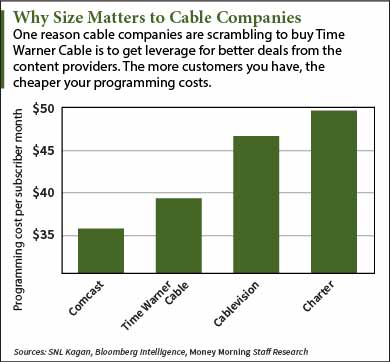 Now TWC shareholders are looking at gains of anywhere from 15% to 35%, depending on which company succeeds in pulling off the deal.

Trading today (Friday) at about $170 a share, TWC stock is already beyond several earlier bids. Analysts now estimate that it will take a bid from between $190 to $230 a share to win Time Warner's heart.

And make no mistake. The allure of Time Warner, the No. 2 cable operator in the United States, is so high that a merger deal is inevitable.

"With Time Warner Cable you have a known price tag," Roger Entner, CEO of Recon Analystics, told The Street. "You also have a profitable company that's executing well and doesn't have significant problems. This isn't a turnaround case."

That's why the No. 1 cable operator, Comcast Corp. (Nasdaq: CMCSA) tried so hard to buy TWC.

This Is Why TWC Stock Keeps Rising

In the 14 months following the announcement of Comcast's intent to buy Time Warner Cable, the New York-based company got leaner. It's profitable and enjoying growth in its subscriber base. And not only does TWC control 20% of the U.S. market, it has a large presence in the top two cities, New York and Los Angeles.

The $45.2 billion Comcast deal fell apart a month ago when it became clear that U.S. regulators, primarily the Federal Communication Commission (FCC) were unlikely to approve it over concerns the resulting company would be overwhelmingly big and powerful.

That's created an opportunity for other would-be buyers. Almost daily reports of suitor interest in Time Warner Cable has pushed TWC stock up 9% just in the past week.