How is the stock market doing today, May 26, 2015: The stock market slumped 190 points as Greece woes, Federal Reserve rate chatter, and a stronger dollar fueled a sell-off.

How Is the Stock Market Doing Today? 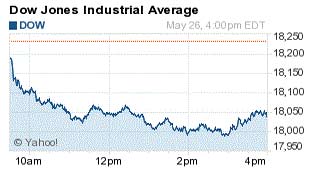 Markets fell across the board:

The U.S. dollar was near a one-month high against a basket of international currencies, while statements from Fed Vice Chair Stanley Fischer signaled the central bank's plans to increase interest rates could fuel global market volatility.

Don't get embarrassed by not knowing what's going on in the markets - stay informed by following us on Twitter @moneymorning.