GW Pharmaceuticals Plc. (Nasdaq: GWPH) stock is up a whopping 70.36% in 2015. And GWPH stock still has legs to take shares higher.

GWPH is a UK-based biopharmaceutical company. It is devoted to the development and commercialization of cannabinoid prescription medicines. 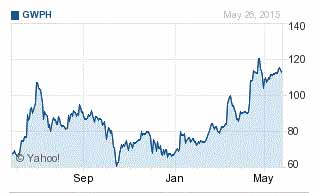 The big attraction to GWPH stock is the company's late-stage marijuana-derived cannabidiol treatment, Epidiolex. The drug is aimed at treating Dravet's syndrome, a rare and severe form of childhood epilepsy.

The designation also implies a much quicker drug approval process when the drug is given the FDA's nod.

GWPH moved close to that nod in May.

That's when the company began pivotal phase 3 trial programs for Epidiolex in childhood epilepsy. GWPH expects trial slots to fill quickly. The company aims to report initial top-line data by the end of 2015.

GWPH's latest data, presented at the American Academy of Neurology in early April, reinforced the company's confidence in Epidiolex becoming an important advancement in the field of treatment-resistant epilepsy.

Alternative treatments are currently available for epilepsy, but their side effects have been described as "awful." The exception is GWPH's in-trial therapy.

The company plans to submit a new drug application (NDA) to the FDA in 2016. It continues to work on all the details needed for a successful commercial launch of Epidiolex.

Money Morning Defense & Tech Specialist Michael A. Robinson pegged GWPH stock as a hot pot stock to watch in early 2014, as a flurry of marijuana-related stocks were on the rise.

Is it too late to invest in GWPH?