Canada's energy industry may be most famous for its world-class oil sands resources. But a new shale oil field could surpass the oil sands as Canada's largest untapped oil reserve.

In fact, it could even rival the massive Bakken shale of North Dakota in terms of recoverable oil.

This area lies north of British Columbia and east of the Yukon. It's the Northwest Territories.

Not all of this Canadian oil is necessarily recoverable. But the Canol and Bluefish shales contain a total approaching 7 billion barrels of economically viable resources.

Here's a look at the vast potential of Canada's Northwest Territories… 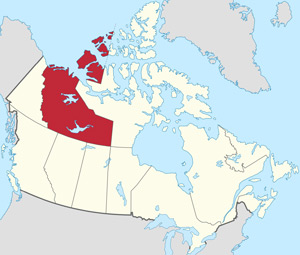 Major oil companies have been exploring this area just 145 kilometers south of the Arctic Circle, known as the Mackenzie Plain, for some time.

A total of 14 exploration licenses have been granted with $628 million in work commitments dating back to 2010.

The Canol Field could hold as much as 145 billion barrels of oil. That's comparable to Texas' Permian basin, where about 3% of oil in place is currently being recovered by operators.

The Bluefish shale has yet to even be explored. It could hold up to 46 billion barrels.

David Ramsay, Minister of Industry, Tourism and Investment for the Government of the Northwest Territories, commented on the NEB data, saying, "This study confirms what we have known all along – that there is significant petroleum potential in the Sahtu."

Developing these fields could be a ways off, however. Some living in the territory as well as Greenpeace oppose fracking, claiming it could contaminate groundwater.

Perhaps an even larger obstacle to development is infrastructure. The area's remote location currently lacks such basic services as an all-weather road. A pipeline system to carry the recovered oil and gas to market will also need to be built eventually.

So now the big question: Can investors profit from this new Canadian shale oil field?

Thanks for the insights into Canada's oil patch.

What do you think the prospects are for KMI to get their pipeline built over the mountain and off to the western costal cities? What prospects do you see for their future?

Also, any insights into CPE and their recent purchase of Legacy Oil? Good or bad? How does their future look to you??

I have a lot of friends in Texas who work in the oil field industry and they talk about new discoveries and developments for finding oil all the time. It's interesting that we are able to continue to find so many resources for fuel. Thanks for the post on the developments in Canada.

Sometimes it feels like half of the people I know are working at the fields in North Dakota. All the equipment for a thousand miles is there, too. I wonder if this discover will cause a similar rush to northern Canada. Thanks for the article.