By the end of June, more than 7.5 million Americans could see their Obamacare premiums skyrocket.

That's when the Supreme Court is expected to rule on King v. Burwell. It's an Obamacare ruling that asserts that Affordable Care Act (ACA) subsidies only apply to citizens who purchased their insurance over a state-run exchange.

You see, many states do not offer state-run exchanges. More than 20 states - including Texas and Florida - boycotted the exchanges. Individuals in those states had to rely on federal exchanges.

Here are the top 10 states that could see the most people impacted by this decision: 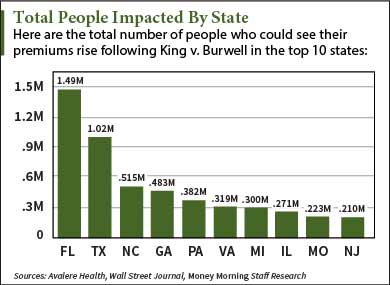 And those people who lose their subsidies will see their premiums skyrocket.

If it's determined the subsidies don't apply, millions of healthy Americans will forego insurance entirely.

"Capitalism being what it is, those same higher prices will, in turn, drive out larger numbers of healthy people, until only the sickest, oldest Americans are left," Fitz-Gerald said. "When you hear the words, 'death spiral' and 'health insurance' in the same sentence, this is what they're talking about."

Here's a look at the top 10 states where the average person impacted will see their premiums rise the most: 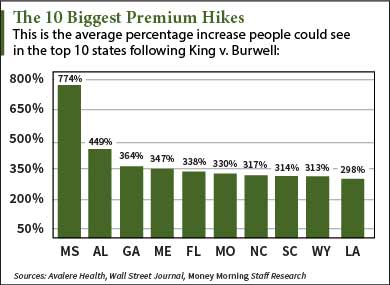 But you don't have to panic from this nightmare scenario. In fact, there's a way you can still profit from it...

How to Profit from the Obamacare Ruling

Before Obamacare, hospitals provided $41 billion in uncompensated care from their emergency rooms. But now that millions of new Americans are receiving subsidized insurance, these hospitals are shelling out much less money.

If the nightmare scenario comes to fruition, we could see a major slump in healthcare stocks. And that would create what Fitz-Gerald describes as a "legendary buying opportunity."

While researching this scenario for his Total Wealth research service readers, Fitz-Gerald actually found three profit opportunities. These healthcare stocks should fall if the Supreme Court rules against the subsidies and will provide investors a great opportunity to enter a lowball order...