For June 1, 2015, here's how the Dow Jones Industrial Average (DJIA) did today, earnings reports, the top stock market news, and stocks to watch based on today's market moves... 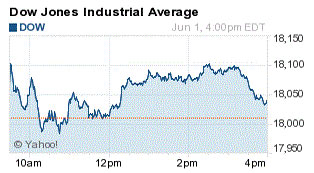 On Monday, the DJIA rose 29.69 points after stronger than expected economic data and news of another huge deal in the semiconductor industry.

The S&P 500 Volatility Index (VIX), the market's fear gauge, was flat on the day.