First, I must point out that, technically speaking, the "Bitcoin market cap" is something of a misnomer. It's what people have come to call the total value of all the bitcoins mined so far multiplied by the current Bitcoin price. 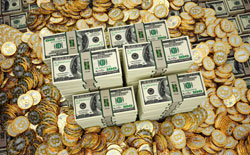 The reason is that it mimics the market cap of a stock. But while the term is not quite accurate, the Bitcoin market cap is a convenient shorthand for describing what all the world's bitcoins are worth at a given point in time.

And it has become a tool for calculating future Bitcoin value.

As of today, the Bitcoin market cap is $3.2 billion. That's 14.22 million bitcoins times $225, the price of Bitcoin on Monday afternoon.

That $3.2 billion total doesn't seem like a lot of money for a technology that's expected to revolutionize the world of finance.

Other global currencies have very high values to facilitate all the transactions that must happen every day to keep the global economy functioning.

The $3.2 billion Bitcoin market cap isn't even a lot in the industry of global transactions.

But don't let these numbers fool you. The Bitcoin market cap will go higher...

The forces that today are driving millions of dollars in venture capital investment in Bitcoin will eventually start to drive the Bitcoin market cap to the levels needed for it to become a global financial tool. Just take a look at what's ahead for Bitcoin prices...

It can/will go higher, but not that high. You forget that the average worldwide power consumption of the Bitcoin network is proportional to price. At a price of $1,000,000 per Bitcoin the Bitcoin network would try to consume a huge chunk of all the power produced on the planet.

Decentralization will make it happen. All electronic devices will mine eventually. The electric use will be as distributed as the network.

IT is simple supply and demand. And demand is NOT there.

I have seen a lot of pump and dump attempts with bitcoin articles. But this one is the most blatant.

Hardly a "pump-and-dump." The time frame for the rise in Bitcoin price is 10-20 years. Demand isn't there now, but will be. Try not to be so cynical.

I like to draw kitties. I used to draw kitties every week. But lately, I have only been drawing one kitty picture a month. And soon, I will only draw 2-3 a year. I guess that means my kitty drawings will be worth MILLIONS soon…since supply will decrease.