The Ambarella stock price has climbed 81% in 2015, compared to a gain of just 1.1% for the Dow Jones Industrial Average in the same time. 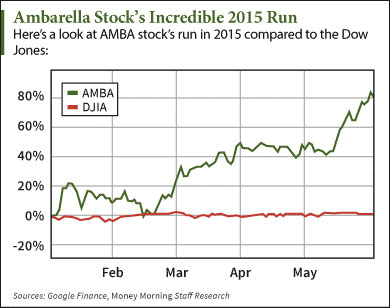 And it climbed 1.2% higher afterhours today after another encouraging earnings report.

Since Money Morning's Defense and Tech Specialist Michael A. Robinson first recommended Ambarella Inc. (Nasdaq: AMBA) stock to readers in August 2013, AMBA stock is up nearly 415%. We recommended AMBA again on April 29. Since then, it's up another 27%.

It's still not too late for investors who missed those gains on Ambarella stock.

Ambarella stock is still one of the best plays in the tech market. Here's why we're still bullish...

Ambarella is a video compression and processing-technology company. It is best known for developing the technology behind GoPro Inc.'s (Nasdaq: GPRO) wearable cameras. AMBA is a small-cap stock with a market cap of just $3 billion.

But the earnings report wasn't the only "Buy" signal we've received for Ambarella stock this week.

AMBA opened Tuesday at $91.44. So hitting those price targets would be an additional gain of 5% and 6.1% from today's price.

In November, it announced a partnership that centered on Google's "Helpouts" service app. "Helpouts" will let teachers, counselors, doctors, home repair specialists, personal trainers, and others offer their paid or free expertise via real-time online video. Google is tapping Ambarella to provide the chips.

"For a small company like Ambarella, hooking up with a heavyweight like Google is incredibly bullish," Robinson said at the time.

But it isn't the partnership with Google or the new price targets that will truly drive Ambarella stock in 2015 - it's this...