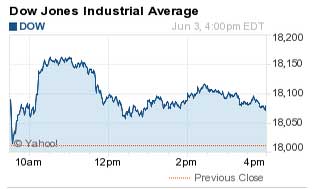 The DJIA index today rose 64 points after investors cheered domestic economic data and the Federal Reserve said the United States economy was growing at a "modest to moderate pace" in the second quarter.

The Fed said the economy expanded between April and May in the Beige Book, which surveys overall economic activity.

Now for the Top Stocks to Watch Today...