An anonymous individual writing under the name "The Pump Stopper" launched a vicious attack on Ekso Bionics Holdings Inc. (OTCBB: EKSO) stock on June 2 that immediately pressured it and caused it to drop 24.28% to close at $1.36 a share on heavy volume. Understandably, that makes a lot of people nervous. 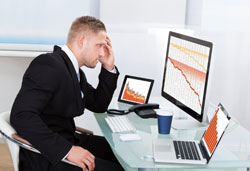 Here's the thing, though.

If you've been in this game long enough, you know what to look for and why stuff like this isn't a big deal in the scheme of things.

Today we're going to talk about how to recognize a legitimate short versus a short attack and what to do about it, especially when it comes to a stock you may own like Ekso.

Here's what you need to know:

First, let's tackle the elephant in the room - stock manipulation.

Most investors are familiar with the phrase "pump and dump." That's what the SEC calls a form of financial fraud used to artificially inflate the price of a stock - usually a small-cap or microcap - for personal gain by distributing misleading and false statements. That's the pump.

The dump comes later when the fraudsters suddenly sell their stock en masse and the price drops catastrophically, causing investors to lose their money.

It used to be done in so-called boiler rooms or small back offices like those depicted in the film The Wolf of Wall Street, but now it's most commonly perpetrated via the Internet and chat boards. Pump and dump is so extensive that these kinds of stock scams may now account for an estimated 5% to 15% of all spam email.

The reverse of that is called "short and distort." That's what's happening with EKSO stock.

Instead of buying the stock in question, the perpetrators typically short the targeted company first, then release theoretically independent reports and analysis that is little more than a thinly veiled smear campaign. Once the stock has fallen, the parties involved buy to cover, bank their profits, and hopefully disappear.

This, too, is illegal, but that doesn't change the fact that it happens all the time.

Sadly, the SEC is totally outclassed and seemingly always a step behind. They simply don't have the resources to detect, prosecute, and punish every short-and-distort artist out there.

Many people wonder how this is possible, especially today. It's not as difficult as you would think...

Thanks for this article, Keith. There's still an alarming amount of panic among us shareholders since the stock price hasn't increased back up much, and ekso has yet to issue that point by point rebuttal. However, it's great to know it's on the way, and that should thing turns green again. Cheers, and thanks again.

I am very concerned that Mr. Fitz-Gerald has not proffered a statement that: he nor any of his companies, what-so-ever, did not receive any funds to promote EKSO !

Omar, is correct that there is no response to the charges, in print, and the report from the SEC. Way past time … for both …

Just to clarify, I am not a pitchman for Ekso or any other stock for that matter. I have never discussed EKSO in any media appearance. Like all our recommendations, EKSO rose to the top by virtue of concerted analysis and ongoing independent research related to the company, its products and its potential. Further, our entire organization – myself included – has strict policies against personal ownership, endorsement and compensation to prevent conflicts of interest.

where can I find the original analysis of ESKO?

Kerry,
You can find all of our EKSO articles, including Keith's original analysis, here:
http://moneymorning.com/tag/ekso-bionics-stock/

I for one am down 35% on EKSO and am wondering when you're going to eat your hat on this bad investment.

Thank You for a most informative article.
Dastardly devils everywhere, evermore . The line up and to the right is never straight.

Had me fooled! If that was a pump and dump you coulda woulda fooled me. But I guess it is legit?