For June 5, 2015, here's how the Dow Jones Industrial Average (DJIA), S&P 500, and Nasdaq did today, the top stock market news, and stocks to watch based on today's market moves…

What Did the Dow Jones Industrial Average (DJIA) Do Today? 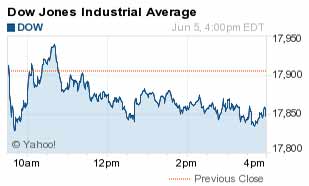 The DJIA today fell more than 56 points after the Bureau of Labor Statistics offered a rosy jobs report that has fueled increased speculation of a pending interest-rate hike by the Federal Reserve.