After a lot of fits and starts, Internet TV is on the verge of breaking out from its niche status.

And while online TV holds the promise of giving consumers more options than they've had in the past, it won't be a panacea. 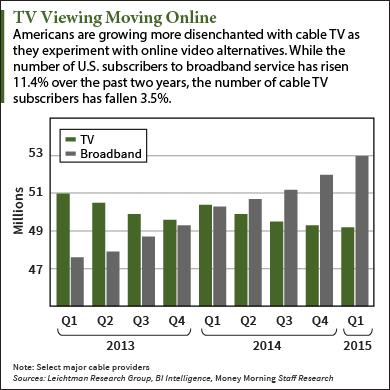 What's happening is that Americans who are fed up with their cable companies – the steep fees, lousy customer service, and restrictive "bundles" – have turned to Internet-based, video-streaming alternatives.

Last month research firm MoffettNathanson reported that the total number of U.S. cable customers shrank by 0.5% from the previous year.

That may not sound like much, but it shows the industry is at a tipping point. The portion of Americans that pay for cable was 80% in 2012, a figure expected to drop to 76.9% by next year.

Companies in the cable industry and beyond know that Internet TV is the future – and no one wants to get left behind. The changes we're seeing now will touch just about every U.S. consumer of video content in some way.

Think about what's been happening:

Moving beyond the era of cable TV companies sounds like a dream come true to most Americans. But Internet TV comes with its own share of frustrations…

The Good, the Bad, and the Ugly of Internet TV

APPLE TV: NOT THE HOLY GRAIL

Once Again, Apple T.V. is being pushed-out. Now its Fall or next year sometime. It sounds an awful like guesswork about when Janet Yellen might actually raise interest rates. The sticking point is the same with all conduits ( cable and internet): Content providers have the upper hand. They control and dictate the price. Apple will have to settle for a smaller assortment of viewer options or pay-up. So, it won't be quite the disruptor it might be whenever it does get released.

This is largely why we don't already have all movies viewable as streaming content on Netflix, but only a small part of the film library. Many more titles are available on DVD. That is not going to change soon, if at all. Only when the content providers own the conduit will you see wider selections- and they won't be cheap for the good movies or classics.