Are U.S. markets soaring to new highs for the right reasons, or are we in a stock market bubble?

What Is a Stock Market Bubble?

A stock market bubble occurs when investors drive stock prices above their true market value. Remember, markets are a reflection not only of investor calculations, but also of investor emotions and beliefs.

The dot-com bubble of the late 1990s is a classic example. People speculated on the development of the exciting, new Internet sector and began to overlook traditional metrics like the P/E ratio. The market was so confident in tech profits that companies could simply add ".com" to the end of their names and they'd get a stock price bump.

But then companies began to run out of capital or went out of business. Executives were convicted of fraud for misuse of shareholder funds, and the SEC cracked down on venture firms for misleading investors. The Stock Market Crash of 2000-2002 obliterated $5 trillion in market value.

But Nobel Laureate and Yale professor of economics Robert Shiller told Goldman Sachs on May 29 that while he isn't certain people have the extravagant expectations you'd find in a "classic bubble," "there is a stock bubble element in what we see."

Typically, stock market bubbles stem from heightened expectations – but this bubble is the opposite. Instead, people have extraordinarily heightened fears about markets right now.

"I detect a tinge of anxiety and insecurity now that is a factor in markets, which is quite different from other market booms historically," Shiller said.

The same thing happened right before the dot.com bubble burst.

You see, Shiller frequently polls institutional and individual investors about confidence in the stock market. He asks, "Do you think the stock market is overvalued, undervalued, or about right?"

"Lately, what I call 'valuation confidence' captured by this question has been on a downward trend, and for individual investors recently reached its lowest point since the stock market peak in 2000," Shiller told Goldman Sachs. "The fact that people don't believe in the valuation of the market is a source of concern and might be a symptom of a bubble, though I don't know that we have enough data to provide it is a bubble." 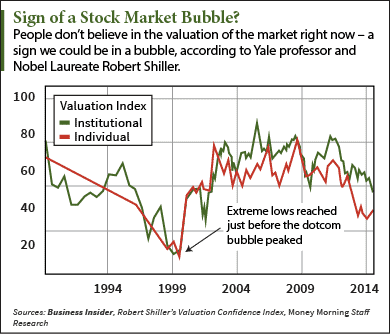 When people are fearful, they tend to want to protect themselves by saving more for retirement and other safety nets. However, they're faced with limited options for high return. And so they invest in overvalued equities, which in turn run up prices even more.

"Since November, I've predicted the U.S. economy would experience a 'growth scare' in 2015," he said on March 22, 2015. "Since then, bond yields have plunged and commodity prices have collapsed. Only stocks have failed to figure out that low growth is a recipe for coming disaster."

Lewitt warned that just because the Fed is terrified to raise interest rates doesn't mean investors should pour money into already overvalued stocks.

Bottom Line: Are we in a stock market bubble? We are, in the very least, flirting with one. Lewitt recommends investors take immediate steps to protect their portfolios from losses.

"If you can't bear to sell your stocks, hedge your portfolio by buying ProShares Short S&P 500 ETF (NYSE Arca: SH) to soften the blow of an inevitable correction," Lewitt said. "Also, look to buy gold now that it has sold off due to the stronger dollar."

No matter where markets are headed in coming months, owning gold is an important part of a healthy portfolio. Check out our chief investment strategist's two-part "cheat sheet" that will help you figure out exactly how much gold you should own, to the dollar, here…

As far as I know, the US FED has been absorbing billions of dollars out of the market to stop the attack against the dollar, by using Belgium as a front purchasing them in the open market.

Belgium has a tiny economy unable to actually be doing the buying, so it is very likely it is the FED who is disappearing the dollars as they threaten the balance.
It is important to emphasize the FED creates dollars out of thin air, as it has been doing for centuries without any backing of any kind, and it can also delete them when it's convenient to it.

The CABAL resembles a source of infection being spread all over the planet, infecting as many top leaders to coerce them with the National debt created in the process of producing the Money Supply with the Fractional Reserve Banking System, imposed by the CABAL'S controlled central banks of every country.

The world is finally catching up with the scam the US has been doing for decades of creating digital billions of dollars and exchanging them for real products and services from the rest of the countries. This is the reason of the formation of the BRICS countries, with China and Russia at the head, building a paralleled financial structure to become independent of the fraud the US is running.

TO BE EXACT, THE FED IS NOT THE USA, it is a CABAL formed by a Financial Cartel controlled by old families with no allegiance to any country on earth.
This CABAL "uses" other countries (like the US and the EU) to implement its agenda, some times even their armies (paid by their taxpayers) to implement its policies, as it happened in the assassination of Gaddafy in Libya when he tried to create a new African currency to compete with the US dollar and the Euro this Cabal closely control as Debt-Based currencies.
The BIS is the Central Bank of Central Banks and therefore closely controlled by this CABAL, and therefore unlikely a solution for the 7 billion people in the world.

The crash of America